skip to main | skip to sidebar

Did you vote today? If you haven't yet, here's a tiny bit of extra incentive to cast your vote. Email me a photo of you with your "I voted" sticker on or post one at your blog and send me the link, and I'll add your name into a drawing for an autographed copy of A Charming Exchange.

Entries must be received no later than Thursday, November 6th, 12:00 a.m. PST. One entry per person. The winner will be announced on Friday.
Posted by Kelly Snelling at 10:02 AM 4 comments:

“We all have our own life to pursue, Our own kind of dream to be weaving... And we all have the power To make wishes come true, As long as we keep believing.”
Louisa May Alcott


Hello! Ruth Here !
In the Nov/Dec issue of Belle Armoire you will discover an article that I wrote for the back page.

In it I compare life to the interwoven textures and layers of a basket….
"Caged Desire" 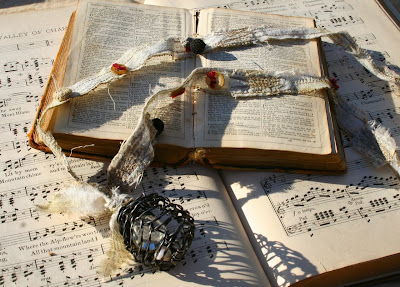 As I have traveled my life’s journey down an artistic path as a fiber artist and jewelry designer, I look back at all the people and experiences that have influenced me, weaving my being and shaping my soul. 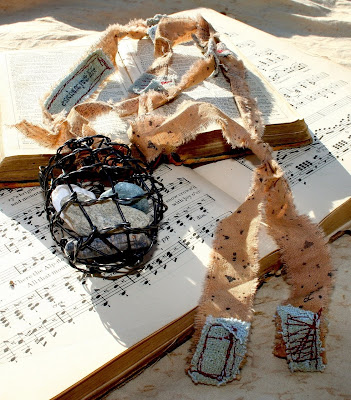 Life is either a great adventure or nothing. 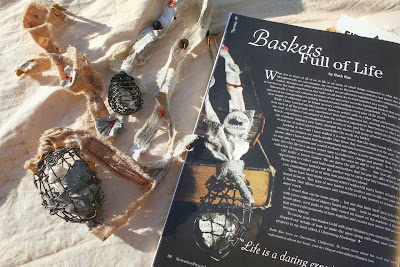 If you want to create your own basket to fill with your treasures you can find the entire step out details along with 25 jewelry projects in our book “A Charming Exchange”.

Kelly and I will be working on the details for a few pieces from the book to go up for auction as well as a youtube vidio with us
Posted by Ruth Rae at 11:12 PM No comments: 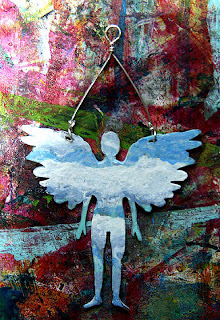 Tammy Powley at About.com Jewelry Making has written a glowing review of A Charming Exchange. It is very cool to see that happen. I don't know Tammy personally but I do read her column. About.com is a great resource for jewelry artists. In addition to book reviews, there are many interesting tutorials and articles that will be of interest to artists. If you get a chance, check it out. 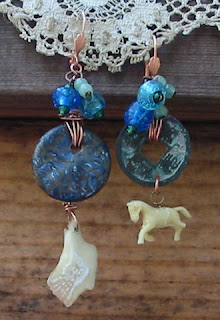 A Charming Exchange is also making an appearance at The Ice House, the art guild of Mayfield, Kentucky, the home town of my youth. For the month of August, the exhibition features art created from people in the community. A Charming Exchange is part of the show. If you are in the area, be sure to stop in. The Ice House is a beautiful place full of inspiration and much talent.
Posted by Kelly Snelling at 9:25 AM 2 comments:

So I admit that I was a cheerleader in high school. Don't worry though, I will not be pulling out any photos of me with my 80s feathered bangs and skinny legs. But I did have to shout the old cheer about being number today. 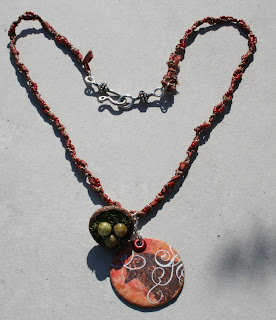 Ruth is currently at the offices of our lovely publishers working on her second book, which will showcase her soulfully beautiful fabric art. And today she had lunch with the awesome members of the F&W Sales Team. They told her that A Charming Exchange is the top selling jewelry book at Barnes and Noble! I am giddy with glee! They said the book is very well-received and is finding its way to prominent positions in the stores. Yay! It just makes me twirl and clap my hands (oh my. too many cheer leading references for one post!).

Thank you all for hollering about the book. Your kind words and posts surely have helped to propel it to these lofty heights. It has been a lot of hard work pulling it together but there is no greater reward than to know that folks are enjoying it. That just makes us so very excited. It feels darn good!

Check out these cases of jewelry charms and pendants and such... When Ruth and I began receiving these elements from all the contributing artists in A Charming Exchange, we had a plan. By the time we finished the book the plan had changed several times. We had picked themes and color schemes and metal colors for projects in the book to try to create a more cohesive selection of finished pieces. But when you have 30+ people all working singly in different locations, you will learn that one person's ideas of romantic vintage are different from another person's...and that's what made it fun but also challenging.

We had so many beautiful pieces that didn't make it into the book. That was hard for us. We tried to get at least one piece from every contributor in the book. And at the same time we had a limited number of projects that we were to create. And, while a particular pendant might have been a real stunner, it also might not have worked with any of the other pieces we had. So we would either create new elements around the one piece or use all the others in the piece without the one. Hard choices.

And now today I've been sorting through five of these blue cases that each contains the earrings, talismans, and some of the found object pieces that were in the book and several charms and elements that were not. When we were working with them in the creative process we had to take all the labels off. So now I'm running back and forth from computer to bags, from boxes to lists trying to sort it all out. It has been such a crazy summer that I haven't gotten to sorting all the pieces out before now. But I had let it hang over my head long enough. I know everyone is eager to have their treasures back. And I want to get them to them. It has been tough because I have these two little boys here with me who are not too pleased to be in the house while I sort jewelry. Sadly, the littlest dude had a fever this morning so I knew we'd be stuck inside all day. So after making him as comfortable as possible (Children's Tylenol - check, silly Underdog movie - check, cool washcloth on his forehead - check) I got down to the job.

I had literally written the names of three girls on plastic bags containing their items when I felt my chair start moving. Since I live in Southern California, this isn't an altogether new sensation. But first I had to ask myself, is there a big truck outside in the cul de sac? Did my 80 lb dog bump into my wheeled desk chair? All this goes through my head in a matter of seconds. As the shaking continues and a small canvas topples off a bookcase, I spring to my feet and shout, "Earthquake!"

I don't think I've ever been home alone with the kids and animals during a real shaker. My husband is usually here. And in the past when we've had big ones, I was still single. So it was a little scary to know that I was the one in charge of getting everyone safely out and one of them had with a fever of 103.

Luckily, by the time we got down the stairs, the shaking stopped. Everyone and everything here was fine. And I kept on working until I got everything sorted. I only have a tiny handful of charms that are unaccounted for. I am happy that we thought to take photos of each set of jewelry labeled with the contributing artist's name as they came in. If you are ever doing a project like this or a swap, I highly suggest your keeping such a file of images on your computer. It is so much easier to identify the pieces visually than to merely write down a description and hope you will know exactly what you were describing as much as a year later.

The reviews of the book are continuing to pour in. You all have been so kind with your comments to us. Thank you so much for your awesome support and encouragement! And if you want to check out what some folks are saying about the book, visit these fabulous people:

They are both amazing artists. You will surely be inspired when you see their lovely creations!
Posted by Kelly Snelling at 6:05 PM 5 comments:

I've heard from a couple of people just this morning saying they have gotten messages from Amazon.com that their pre-ordered copies of A Charming Exchange are on their way. I admit it. I am very excited. It's been two years that we've been working on this project! And the book is finally reaching the readers! Hallelujah I am so very excited!! Also, if you want to read the most glowing reviews of the book, be sure to stop by Amber Dawn's Inventive Soul. As she tells it, "this book will blow your mind even if you are jaded!" And visit the lovely Catherine Witherell's Happy Day Art to see some of the awesome work she contributed to our book.

The Book Is Coming! Many of the artists who contributed to A Charming Exchange are starting to receive their copies of the book in the mail. I can't begin to tell you how exciting it is to hear from them as they see the finished pieces for the very first time. I have butterflies in my stomach and shivers up and down my spine. Seriously! They have all been so generous with their gifts and their friendship. Ruth and I so wanted to produce pieces that they could be proud of. And I think we did it! Check out these wonderful blogs for previews and reviews as the artists are seeing the book for the first time...

The dream was always running ahead of me. To catch up, to live for a moment in unison with it, that was the miracle. - Anais Nin

Hello, Hello! It's Kelly here. Ruth and I have been working like mad women these past few months along with our awesome editor, Tonia, to put the final finishing touches on A Charming Exchange. We were finally able to see the pages with the written words and images for the first time. It was very exciting. The traveling gypsy who is Ruth, was in Chicago visiting Deborah when the manuscript arrived. I ended up snapping photos of the pages and emailing them to her. We were both so giddy, I knew she needed to see them right then and there.

The pages arrive and we take out our colored pens and go to work. At this point, we've been working on the book for about a year. Seeing the photos of the jewelry was refreshing (literally and figuratively). There are so many different projects and pieces in the book that it was great to finally see them all again. But I, for one, am getting tired of reading the words I wrote over and over again. It would be easy to linger far too long over the smallest of details. But there are only so many elements under our control. And that is probably for the best or we might be at it for another year. We are so ready for the book to be printed and in our hands.

And we cannot wait for you all to see it as well!!! It is set to hit stores in August (which is coming up much more quickly than expected). We are planning all sorts of things in conjunction with the release. So keep your eyes open and you'll see some upcoming book signings and classes that we'll be teaching in support of A Charming Exchange.

blogs that link to us: